So I’ve finally remembered to revert to the “classic” pairing format as established in my first post on this site. That is to say: choose an album to listen to and then find a good beer to go with it.

It’s probably fairly evident that I love this band, given that I’ve already featured them in editions #5 and #21, but I think this is justified.
Longing To Be The Mountain is exactly what it sounds like: yearning, introspective, but completely majestic. Nowhere near as monstrous as the band name implies, this is a classic, diverse, fully-realised rock record.
I own a lot of music, and I’ve come to realise that I associate LPs with moods and purposes. Sometimes I need an LP that’s going to accompany my walk to/from work (The Sword, Earthless, most Mastodon albums, various bits of IDM). Sometimes I need something sufficiently energising to get me through the washing up (Muse, Graveyard, Greenleaf, Hendrix, All Them Witches). And then sometimes you need an album that you can really listen to, on the sofa (with a good beer); to fit in this category you really need something with enough of an emotional journey to rival a movie or novel.
Out of the stuff I own, I’d include in this category all Pink Floyd, some Zeppelin, almost any Steven Wilson project, Weedpecker, and this.
The album starts with a very nice Gilmour guitar tone, and progresses into a mellow, Zeppelin-III piece with gentle acoustics, those characteristic hypnotic vocals and back-to-the-land imagery. The album undulates beautifully from that point onwards and no sound ever outstays its welcome; Sean even seems to manage to find a new way to use a delay pedal on each track. There are moments of towering heaviness; it would perhaps fall a little flat if there weren’t. The glowering doom in the the title track is an unexpected joy. But there are far too many psych-rock albums that rely unnecessarily on monolithic riffage when you can tell that the band is capable of much more; conversely, KB have created an album that seems content to just be what it is without trying too hard.

This is a brewery I’ve always rated very highly (I don’t believe I’ve ever had anything from them to dislike), and yet for some reason I don’t tend to see much in the way of hype over them. They’re a solid, reliable brewery with strong branding and a knack of balancing straightforward beers with spectacularly eccentric ones.
Black Perle is a magnificent milk stout with coffee beans, but unusually a very sessionable one at 3.8%. The aroma is a fresh-roasted-coffee monstrosity, profound in character and pronounced with precise clarity. I’ve had a lot of coffee porters / stouts and most of them tend towards the sweet; this one sticks to the dry and roasted end of the spectrum and feels a little fresher as a result. It packs a massive amount of flavour in for such a modest ABV, but stays manageable. It’s an excellent beer. 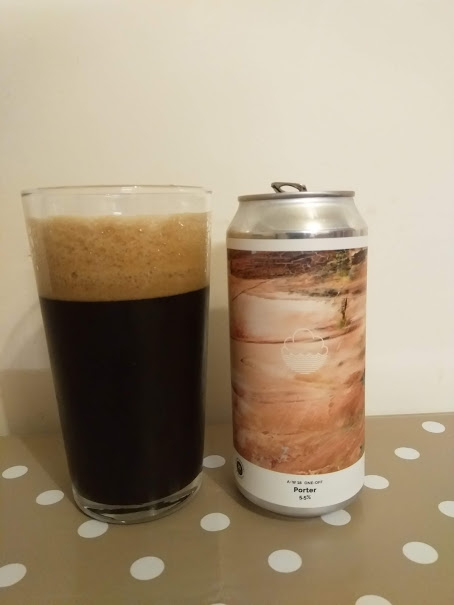 I’ve neglected Cloudwater for a long time; this seems daft for a brewery currently rated 2nd best in the world on RateBeer. In honesty, I’d had a disappointing DDH pale from them sometime in 2017 and subsequently tended to overlook them due to cost (I still have issues with the proliferation of 440ml cans).
I confess I remain confused with their range definitions, but I’ve decided to look past that. The artwork is more beautiful than ever, and the last time I saw a dark beer from them was several years ago, so this was a must. A strong connection with the seasons is evident (and reinforced on the website). This feels like an American porter to me: there’s a huge roasted aroma and initial flavour, which opens up to an epic hit of tropical fruit and pine. The aroma is slightly misleading, majoring on roast and a fleeting, flirtatious hint of smoke, which gives nothing away regarding the hop blast you get at the finish.
This is not easy going, but it’s spectacular. Thank you, Cloudwater, for convincing me to restart.

View all posts by circlemaster